Let me take a few minutes to give you some insight into some training I do for students. I believe in making firearms training realistic. Whenever possible, doing things at the range that will directly apply to actual shooting situations. Today I’ll focus on range training, but these techniques can also be applied to training with air-soft, dry fire, or the SIRT or other laser training pistols.

Typically we go through life in a calm and sedate manner. When something out of the ordinary occurs, a potential threat or other non-typical incident, several things happen quickly. You are presented with sensory input – seeing something, hearing something, even smelling something. These inputs are perceived and your brain then processes the information and tells you whether it’s the cat knocking something off the counter, or if a car has just run the light and you need to take evasive action to avoid getting into a crash.

In a shooting situation it is a similar process. Is that shadowy figure in the alley a drunk just heading for a place to sleep, or is it someone who is approaching you with the intent to rob or harm you? Some cues you actively process, others are processed at the subcounscious level. The combination of these two methods leads you to feel comfortable, or some degree of fear. If the result is fear, the body takes the next steps on it’s own – releasing body chemicals to prepare for a “flight” or “fight” action.

At some other place & time I’ll talk about what you need to do when you train to “embrace” the fight or flight reactions, but today I’m focusing only on target choice to help you get used to the process you will go through as you determine what action to take in the few seconds following the realization you are in danger. You need to quickly figure out what is going on, and then take action to get the heck out of there, or if escape is not an option, what you need to do to defend yourself or others.

Below are a series of targets I use to help train your brain and thinking process to adapt to the OODA Loop in an actual shooting situation (available through Law Enforcement Targets – www.letargets.com). I have three targets that have the numbers 1-6: shapes of; circle, square, and triangle: and colors; red, yellow, and blue. They are also identified by the letters: “A,” “B,” and “C,” which I often write largely in the upper center of each target, just above the colored shapes with numbers.

The fourth target (as used by the L.A. Sheriff’s Office Special Enforcement Bureau), has numbers and shapes on either side, doesn’t have the colors, but adds a humanoid “blob” silhouette with three target areas in the head, upper chest, and lower abdomen for additional target identification challenges. As you can imagine, each of these targets offer a variety of opportunities for training. 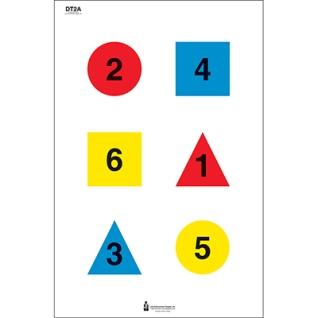 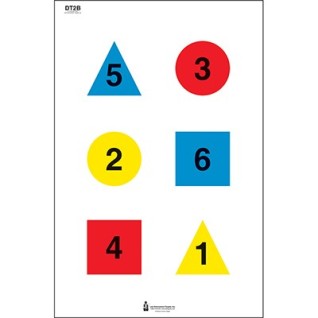 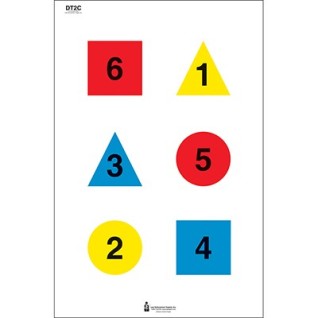 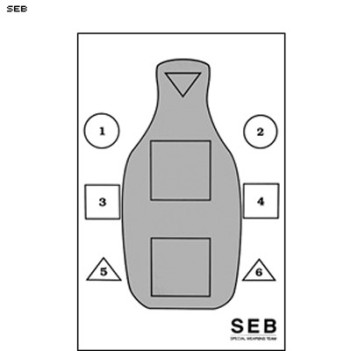 Using the multi-color targets, the instructor can call out one of the three targets (A, B, or C), one of the numbers 1-6, one of the colors, and or one of the shapes (A-Red-Two, C- Blue-Square, A-One, B-Three, etc.). They can also call out just a number – so you would have to shoot the number “4” (as an example) on each of the three targets. They could call out a color and number combination that doesn’t exist, or one that appears on more than one target. As the student you don’t know if you will engage one target, two, or even if you will not have a legitimate target to engage – just like the real world.

Let’s go back to review Col. John Boyd’s OODA Loop and what happens in your decision cycle:

You receive and process information, make a decision and then act –

After a few times of going through this, I then have the student shoot two rounds into each target called out. We correct bad form – such as shooting and then immediately lowering the pistol. I train students to keep the pistol up for a bit after the shot, just in case you need to shoot additional rounds – the gun is still up, generally pointed at the targets and ready, and doesn’t need to be brought back up to target level – which takes valuable time. Shoot, hesitate a moment, force yourself to look around to check for additional threats, check again, and then if everything is clear – you can relax a bit and lower the gun.

Now here’s the benefit. At the range you are using similar synopses and similar thought patterns and reactions that you would be using in an actual shooting situation. The competitive nature of wanting to hit all the targets in the right order gets some brain chemicals flowing, and does a little bit to train yourself to function when under stress. There are other ways to make this a bit more realistic, and more challenging, but you can see that for a beginning shooter, this drill lets them get a taste of the multiple targets, and multiple round count that is very likely to happen in the real world.

Another thing the students very quickly discover the advantage of a higher capacity firearm. Lower capacity pistols need to be reloaded more often, and under stress, that takes time – less time the better and more practiced you are, but when you shoot one round and realize you need to reload before you can engage that second target, you wonder if that little gun (the one that is easy to carry – but not that easy to shoot or reload) was the right choice.

While some shootings only have one or two rounds expended and are done, keep in mind that in real world situations, a motivated bad guy will likely take three, four, or even more rounds before their brain tells them to stop the attack against you. Since many bad guys travel in pairs, or with friends, you may need ten to fifteen rounds to stop the attack against you. My suggestion would be to carry a higher capacity pistol, or carry at least two additional magazines and practice your reloading drills a lot.

OK, take this information and apply it to your next range session. Think about ways to make yourself think, process, act and react like you might need to someday in a real situation. Have a shooting partner give you a command. Process that direction, identify the target, decide what action to take, and engage as you might in a real situation.